Brought to you by

At this very moment, Laura Kennington is cycling alone across Denmark, heading towards the city of Bergen in Norway. By the time she reaches her destination, she will have cycled over 80 miles a day on her own, for two and half months. Travelling through eight countries and over 6,000 kilometres, she will have battled dramatically different weather conditions and pushed her body to its very limit.

As a renowned UK adventurer and KEEN ambassador, this challenge and others like it, have become an important part of Laura’s life. Using her human powered journeys as a platform to inspire and encourage others to get outside, she is quickly becoming one of the best-known endurance athletes in the UK.

We recently called her on one of the rare rest days on her international adventure, to chat about the ride, talk about how she went from office worker to adventurer and to get some tips that we can all use to take action and change our lives for the better.

Laura never considered a life in the great outdoors until a crossroads in her mid twenties changed everything. “I had a little bit of a mid twenties life crisis I suppose” Laura explains, as I Skype her from the road in Denmark. “I realised that everyone was getting mortgages and I thought that’s what I should be doing to.”

Stuck in an office job that stifled her, she began looking for other ways to make money that could be more flexible and creative with her work schedule, and began to study to be a personal trainer. Although she didn’t know it then, this was the first step away from her old life, and towards the life of an adventurer. “It all sort of spiralled from there” she says, “I learned a lot more about sport science and got absolutely fascinated with what the human body can do.”

This new interest quickly led Laura towards testing her own limits and the boundaries of what she could accomplish through physical strength in the outdoors, starting with shorter endurance challenges and building to crazier and more badass adventures. “The challenges just started getting bigger and bigger” she says, “I suddenly realised that I’d tapped into something that I absolutely love.”

The point from which we’re chatting to her now, half way through a solo adventure, pushing herself thousands of miles across multiple countries with only her bike for company, shows he amazing career that Laura has succeeded in creating for herself. From starting in the very northern parts of the UK, she’s been riding for almost two months, though multiple countries.

“Denmark I am absolutely in love with” she says, “I’d just had a rough patch in the middle of Germany, where some of the cycle paths were bumpy and I got horrendous weather. Then as soon as I crossed into Denmark everything smoothed out, I absolutely love it. I’d never been t Denmark before, so I didn’t know what to expect but the people are just overwhelmingly friendly and kind hearted.”

The worst day was in the UK” she laughs. “There was a day when my body just started rejecting food, I was really unwell and on this horrendously busy A road. The morning had been spent on these ridiculous detours, Google maps sent me through a few fields and I had to lift my bike over fences, up steps, it was ridiculous. I got sick of that so decided to go on the road. Then a couple of hours into the day, my body just wasn’t having any of it, I was throwing up on the side of the road with lorries hurtling past, and obviously it was raining as well, it was just really bleak.”

“There was another day when I’d been cycling for 10 hours, the when I got to where I needed to be and nowhere was open for food. I had a really uninspiring dinner of a few spoonfuls of peanut butter and one wrap that I had left. I thought ‘I’ve cycled 95 miles and this is my reward? This is bogus!’ ”

As in all parts of life however, you battle through the bad parts, in order to reach the good, and recently, the journey is getting sweeter and sweeter. “We have an amazing planet, human beings are, in general, really lovely” says Laura. “You have to be pretty unlucky to come across a bad egg , travelling teaches me how human kindness prevails all over the world.”

This is just the latest in a series of amazing adventures dreamt up by Laura. Back in 2015, she decided to embark on a mission to kayak the entire length of the Volga River in Russia, from source to sea, 2,300km of solo and self-sufficient paddling.

This adventure is Laura’s most notable adventure, but not for the reasons she ever expected. “Unexpectedly, that trip went completely viral in Russian media” she explains. “I was on all of these news sites. I became an accidental Russian celebrity.”

Public support and interest can motivate and add to the experience of attempting a great challenge, but Laura soon started to experience the darker side of the instant fame she had found in Russia. “I had a little tracker map that was on a delay and would switch off when I was camping” she says, “but there was one incident where people tracked me down to my campsite. It was not very nice, but thankfully I was camped with a father and son that I had met earlier that day.”

“At that point, I came off the river and had a look at what was going on and realised the extent of the publicity. I was getting thousands of messages, some of them quite sinister, it was just a whole circus.”

While Laura was forced to accept the safety issues caused by her notoriety in Russia and end her expedition early, the experience has only seemed to push her forward to take on more exciting and risky adventures. From cycling 2600 km through Ireland, to kayaking 236 miles home for Christmas and completing a triathlon round all three of the Channel Islands, it seems like there’s nothing that Laura won’t put her had to and have a go at. 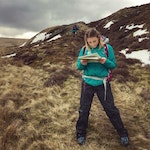 This ‘go and get it’ attitude that’s pushed Laura’s transformation into a true adventurer, is the thing that got her noticed by KEEN and convinced them to ask her to join them and become an official ambassador. Now a full member of the family, Laura is the perfect person to spread the message about Better Takes Action, a movement from KEEN, designed to inspire people to take action in their lives and the lives of others, from the smallest change right through to the huge events like Laura’s adventures. It’s an ethos that entirely resonates with her, following her own unlikely journey.

“There’s a huge merit in taking small steps. You can push your comfort zone in bits and pieces”

“Better takes action is at the heart of everything I do really” she explains. “It’s about taking any move towards something better. For so many people, the hardest bit is taking that first step. It’s important to acknowledge however, that even if it’s a baby step, you need to take it for something to change. Those tiny steps really quickly add up. Ditch all the excuses, have a good solid look at what needs improving and making a commitment to at least take your first step.”

“There’s a huge merit in taking small steps. You can push your comfort zone in bits and pieces. Even if you just take your bike and cycle to the coast, pitch up for the night and have a little overnight adventure, you’ll wake up the next morning feeling completely awesome. It’s just doing something new and trying something you haven’t tried before.” Laura is the perfect example of what Better Takes Action really means and why it matters. She didn’t set out to live a life of endurance and adventure, she simply knew that she wasn’t content with what she was doing and went to find something better. It’s an approach to life that every single one of us can learn from.

“We’re just not designed to be miserable, Monday to Friday, nine to five, that’s a long time to spend hating your life” Laura says, before we put down the phone so she can set back off on her bike. “Life is too short to live for Friday, it’s a cliché but I really do think that it’s true. It’s just important to pour your energy into something you love.”

Brought to you by

Get yourself fighting fit for Camp Wildfire, with our obstacle course training plan!

Eastern Unknown | We Discovered A Trail Paradise In Switzerland

Eastern Unknown | We Discovered A Trail Paradise In Switzerland

Fancy a last minute festival? KEEN are sending a lucky group of mates away to the best party of the summer. Enter now!

Waterfall hikes, paragliding, trail runs, bungee jumps and much more. If you love the outdoors, this weekend will blow you away...