From Wolverhampton To Pro Surfer

Meet Corinne Evans, the 27 year-old freesurfer and model from Cornwall who is changing women's surfing for the better

Wolverhampton isn’t known for producing professional surfers. Football and grim nightclubs yes, but not surfers. That was until Corinne Evans came along.

At just 27 years old, Corinne has made huge progress for women’s surfing in the UK. She’s a team rider for surf brand Animal and C-Skins, modelling their products and freesurfing on the side, as well as teaming up to promote car company Ford.

I used to be so self conscious when I was younger, but you get to the point where you just don’t care anymore

When she’s not in the water, she’s running her own Girls’ Surf Tour across the UK and organising Surf Betty’s, a festival dedicated to women’s surfing.

When I meet Corinne, it’s clear to see that Newquay is now very much her home. “I couldn’t imagine living anywhere else,” she tells me as we sit down with a coffee at Gilmore’s, a hip new Cali-Mexican restaurant in the town.

Corinne’s family moved to Newquay when she was just 13 years-old. She wasn’t one of those prodigies that surfed before she could walk. She only took up surfing when she was 15.

As we talk, I’m struck by how confident and eloquent Corinne is. Far from the common misconception people make about models and surfers, Corinne is one of the most pro-active, passionate women I’ve ever met.

She is dedicated to promoting women’s surfing and isn’t afraid to pursue the life she’s always wanted – travelling, surfing and spreading her enthusiasm for the sport. But riding waves hasn’t always come naturally to Corinne. She tells me how it took years to build her confidence enough to progress as a surfer.

“I could never paddle out back. I really struggled with it. My brother was always saying, ‘You need to paddle harder!’ I was like, ‘I’m trying!’ I couldn’t even do a press up, my arms were so weak.”

It wasn’t until she finished her A-Levels and spent a summer working in southwest France that she really discovered her love for surfing. “When I came home, I realised I couldn’t spend a winter not surfing. So I got myself a good wetsuit and stuck it out. You have to dig deep at times to go in on those cold days.”

The next few years were spent working, surfing and travelling as much as possible. Then one day, it just clicked. “I remember surfing Snapper in Australia back in 2010 and thinking, I’ve kind of got this,” she whispers.

“I wasn’t doing much but it felt so good to ride the whole wave and not just fall off it at the start!”

Modelling was something Corinne had always pursued on the side, but she didn’t combine it with surfing until her early twenties.

“I saw what Alana Blanchard and all the surfer girls were doing – being surfers and models for their sponsors. I thought I would love that, it would be the best job ever.”

After contacting a few companies with her portfolio, Corinne signed with Fox and wetsuit company C Skins on a product-only basis. “Up until then, I’d worked everywhere – from Accessorize to waiting tables and pulling pints – just to get money to travel and surf.”

When she finally signed with Animal in 2012, she finally took the plunge to focus solely on career as a freesurfer and model. “I decided I wasn’t going to do another part time job, I was going to put all my energy into marketing myself and getting companies to invest in me. It was a risk, but it paid off.”

Corinne was tempted to go down the competitive surfing route at first, but quickly realised it just wasn’t for her. “When I first started surfing, I was like yes I should [compete] because everyone else does it. But it just wasn’t my thing.”

“I remember doing the English Nationals one year when it was really stormy. The waves were huge and I just thought I don’t want to surf in this. I’m not naturally competitive and I just crumbled under the pressure.”

Instead, Corinne carved her own path – gaining media covering for freesurfing and modeling for shoots rather than competing. “I was never going to be a world champion. I thrive more by going on trips and just surfing, because that’s what I love doing.”

But what most intrigued me about Corinne is the huge amount of effort she’s put into raising awareness for female surfers in the UK.

In 2010, she set up her own Girls’ Surf Tour, organising all-female surf sessions across the UK. It started off as a fun free day for girls. Now there numerous dates on the Surf Tour across the summer – with women aged 6 to 60.

Corinne explains the Surf Tour is there to encourage more women to get in the water and learn to surf. “A lot of women come along and say they’ve had a really bad wipeout and it really put them off surfing. I empathise with that. The sea is quite scary at times and can really knock your confidence.”

“I want the Surf Tour to help girls of all abilities – from girls that want to improve their surfing but also the women who just want to give it a go.”

Then in 2014, she started up her own surf festival for women called Surf Betty’s. “I’d always wanted to go to a really fun day focused entirely around women’s surfing – from fashion to crafts to yoga. So I decided to set it up myself.”

It was held for the first time on Great Western Beach in Newquay last year and is back for a second time this August. The aim is to raise money for cancer charity Keep A Breast Foundation. This year, they’re offering free surf and yoga sessions, tie dye workshops, Sambora mini manicures and hair plaiting on the beach.

“I wanted to make everything to keep it really rustic and cool. My fiancé Ben was amazing. He was building crate tables and hammering signposts together outside our house the night before the festival.”

It’s still early days, but so far Surf Betty’s has been a huge success. “I don’t want an event that’s going to break the bank. I just want people to come, have a really nice time and donate money to charity.” 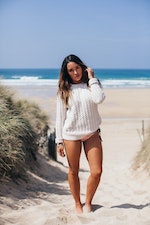 It’s clear that Corinne is so passionate about getting more women involved in surfing – and it comes through in the way she speaks about her projects. As a surfer and model, I’ve got to ask her – does she think there’s too much pressure on young female surfers today to look a certain way?

“I think there is, but there’s always been that pressure. I remember being a teen and looking at women in surf magazines and thinking, why is their skin so perfect? Why don’t I look like that? I think it’s hard for teenagers these days, particularly with social media. You can’t escape it.”

“I used to be so self conscious when I was younger. I’m not skinny, I’m quite muscly. I wouldn’t wear shorter shots, but you get to the point where you are just like, whatever!

“I am never going to have a thigh gap. I’ve accepted that because that’s not how my body is. Then there are girls who will probably never be able to not have a thigh gap because it’s genetically how they are. Everyone is different. The emphasis should be on having a healthy body. I am so much more confident with my body now. I think it comes with age.”

For someone who is just 27 years old, Corinne has achieved so much. With a schedule that’s jammed packed with surf camps right through the winter, does she ever get time to relax?

“Yes, definitely. I love surfing – that’s what it’s all about for me. I recently tested out the new Ford Tourneo Connect, which is great for heading off on surf adventures with my friends.”

While the number of women surfing in the UK is increasing, there still seems like a long way to go. “There are still so many times I’m sitting out back and I’m the only girl.” I can’t help but agree.

But if Corinne carries on inspiring women of all ages to pick up a board and jump in the whitewater, I think there’s a lot of hope for the future.

You can take a look at Corinne Evan’s spring surf edit below. Learn more about the Girls’ Surf Tour and Surf Betty’s Festival here.