How amazing are these photos of sleeping sperm whales that were captured by photographer Franco Banfi last week?

Only ten years ago, no one really knew how sperm whales slept, or if they did so for any significant amount of time at any point. While many had theories, real evidence of sperm whales sleeping habits had never been witnessed or captured on film.

In 2008, the first footage was a captured of a group of whales sleeping. It was captured by a group of biologists from the UK and Japan, when they drifted into a group of completely still sperm whales.

Since that discovery however, sleeping sperm whales have remained one of the rarest sighting in the ocean, making Banfi’s shots all the more incredible.

The awesome photos were captured in the Caribbean Sea, near Dominica Island, while Banfi was following the pack of whales on a diving trip.

All of a sudden, the animals stopped moving and became still, moving to become vertical in a parallel and synchronised rest, allowing Banfi to swim around them and document the beautiful and fascinating behaviour.

While many people now swim with sperm whales photograph them each year, very few manage to have this experience as this collective nap occurs for approximately 7 percent of the whale’s life, in short intervals of just 6-24 minutes.

Totally breathtaking, and a once in a lifetime experience…. 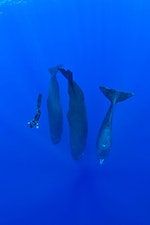 This is not good news.

World Overshoot Day | Mankind Has Used Up All Of The Planet's Natural Resources For The Year In 8 Months....

Most people learn to ride horses as children, Ocean Ramsey learned how to ride sharks.....

This Woman Swims And Dances Underwater With Man-Eating Sharks, To Make People See Them In A New Light

Some parts of the UK hold 88 times more farmed animals than people....

Green energy has never been so adorable....

Our Summertime Glitter Obsession Is Killing The Planet, So We Found An Alternative....

Sparkle up this summer, without hurting the environment....

Our Summertime Glitter Obsession Is Killing The Planet, So We Found An Alternative....