When GQ commissioned a style feature to be shot in the autumn of last year, they probably didn’t expect it to have too much of a reaction. The premise was to show off hip and sexy climbing gear through a photoshoot of a hip and sexy group of friends on a weekend away. A fairly standard piece, if slightly away from their normal urban surroundings.

When they hit publish however, a reaction is what they got. Their premise of taking ‘three premier climbers and a couple of cute friends weekend warrioring in the country’s grooviest high-desert town’ got a lot of people ticked off. Why? The premier climbers were all men and  the cute friends? They were women who just came along  to pose and watch

When Outdoor Women’s Alliance caught wind of the feature, they had the perfect response, penning an open letter to the magazine and creating their own spoof shoot “we took three A-number-1 climbers and some adorable friends out for a weekend jaunt where all the far-out cool kids go—Vantage.” in response. In an amazing move OWA recreated the photos from the shoot, with women taken off the sidelines and put straight int the middle of the action and the guys put to the side as eye candy.

The original shoot wasn’t deliberately hurtful, excluding or offensive, it wasn’t purposefully excluding and ignoring female climbers. It’s just  clear that at no point during that shoot did a single person on the GQ team turn around and go ‘shouldn’t we get photos of the women climbing? Won’t female climbers find this a little rude?’ – and  that right there is the problem.

The climbing community is a tight knit and supportive network. From its routes as a group of young white men in Patagonia, it has now grown into one of the most all inclusive and open action sports around. GQ were naive and ignorant to think that they could win the approval of the climbing community by sidelining women, the sport where Lynn Hill, Beth Rodden, Steph Davis, Hazel Findlay, Sasha DiGiulian, Alex Puccio, Lucie Horozova, Shauna Coxsey, Ashima Shiraishi and Pamela Pac reign supreme.

Women have to prove again and again that they deserve a space on the pitch, no matter how proficient and talented they are at the sport. They won’t stand for being pushed back into the spectator box just so brands can sell their products. 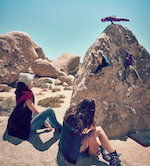 Sage Erickson Wins The Women’s Vans US Open of Surfing

"I’m not world champ, it’s just the US Open, but it still feels like that so I’m going to celebrate it like I am."

Sage Erickson Wins The Women’s Vans US Open of Surfing

Designed by women, for women. How did we get on with the new addition to the Liv family?

Women Are Killing It In Sport Right Now, So Why Do 70% Of Us Still Feel Like It's A Boy's Game?

Women are breaking through stereotypes in sport, don't let society define you!

Women Are Killing It In Sport Right Now, So Why Do 70% Of Us Still Feel Like It's A Boy's Game?