There are so many things about ourselves that society makes us question and feel bad about on an ongoing basis.

Age is something that we all think about and internalise. It’s easy to worry about things being ‘age appropriate’, to worry about how long we have left before we get old, to worry about losing some kind of sparkle once our early years are in the past.

There are some people however, who manage to push all of those labels aside and show the rest of us how stupid and superficial they are.

Julie H is one of those people. 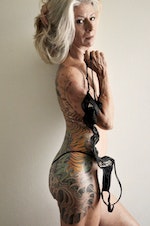 The 56-year-old from Texas, who also goes by the name Burning Lotus, started to take portraits of her naked body as she reached the age of 50.

“I posted my images initially as a dare to myself initially” says Julie, “an affirmation of existence.”

Her photos really began to get noticed by the internet in 2012, when the image of her holding her bra of one shoulder started to get reposted, because of her amazing tattoos. The image went from 25 shares, to 250, to 2,500 and then over 25,000 in the  first day. 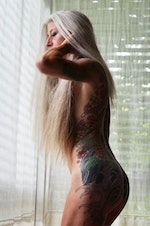 Julie says that her images aren’t intended as a purely sexual exercise, instead they make a point on how much power a naked body can have, especially when it’s purposefully not obeying the rules of what is and isn’t allowed.

“I simply see the human body as an amazing machine with many moving parts. And parts is parts. Society aligns value and stigma on what is appropriate and what isn’t.”

“I suppose I’m just tone deaf when it comes to so-called societal norms.” 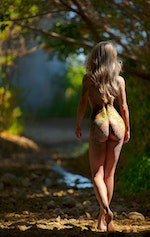 Now, let’s not pretend that Julie’s success in spreading her message isn’t in partly to do with the fact that, while being older than the normal nude model, she’s still totally gorgeous naked.

Still, no matter what the  reasons for her success, we love Julie’s tattooed style, her f**k you attitude to being respectable and refusal to ‘act her age’. Let’s be honest, Julie and her photos are totally badass.

Let’s work on not only making alternative and less mainstream bodies and styles more visible in the public eye, but also creating a better and more open conversation on women’s bodies in general!

We've teamed up with the cherry experts, USA Montmorency Tart Cherries, to bring you a delicious treat

Glitter, Dancing, Cocktails And A Disco... This Is The Wildest Yoga Class In The World

Glitter, Dancing, Cocktails And A Disco... This Is The Wildest Yoga Class In The World

The food at the end of your nights out will never be the same again...

Lets put down down our phones and start playing outside again!