Last weekend saw the return of Parklife, Manchester’s best loved summer festival. Following a couple of rather damp years, Parklife 2018 was an almost entirely sunny affair. Of course, it just wouldn’t be Manchester unless the heavens opened at some point, and by the time Chvrches left the stage on Sunday evening, the bejewelled women and glittered up blokes in the crowd were soaked enough to look like extras a theatre production of Little Mermaid.

By contrast, Saturday evening was hot and dry enough for the pit during AJ Tracey’s set to look like a sandstorm whipping through a desert. Summer vibes were strong, and combined with some of the biggest names in grime, dance, electro and inde’, it was a weekend that few who were there will forget (although there were definitely a handful of people we saw that will struggle to remember it).

“The best, and most badass people from Parklife Festival in Manchester last weekend”

Parklife’s origins may be Madchester through-and-through, but as it’s grown over the years, it’s attracted the great and the good of urban and electronic music, with the likes of Frank Ocean, Boy Better Know, A Tribe Called Quest, Major Lazer and Diplo to name a few, all playing over the past few years.

Parklife 2018 took things even further than ever before with a barrage of sets from the likes of The XX, N.E.R.D, Bonobo, Giggs, Lorde, Justice, Chvrches, Bicep, Annie mac, Jessie Ware, Justice and more. Highlights include A$AP Rocky, who was joined on stage by a surprise appearance by Skepta on Saturday, and on Sunday during his own headline set, Skepta brought out JME and Frisco for a Boy Better Know reunion.

Sunday also saw the return of Liam Gallagher to Manchester. The parker wearing singer romped through a set that only included three of his new songs, opting for a crowd-pleasing trip down memory lane as he ripped through Oasis classics including Morning Glory, Some Might Say, Supersonic, Cigarettes and Alcohol, and Wonderwall. Yes, he also played Songbird. Yes, we can move on.

But, as with the city that hosts it, while music plays a significant role at Parklife, it’s the people and the style that that make it the special experience it is. Here are some of the best, and most badass people from Parklife Festival in Manchester last weekend.

Laura and Emma (aka DJ EMA)

“My friend, Lucy Roper from Living Designs creates these hats for me to wear when I’m DJing. I’ve got a few of them, but this one’s got a Manchester bee on it” “Camo’s never going away. I love it.  This is all from Urban Outfitters”

“Everything’s from Boohoo or Asos. We both go through Instagram to check for style ideas.”

“It’s from Akira online. I was really embarrassed earlier when I had to see my other half’s mum dressed like this!”

Mat With One T

“These? Oh, it’s just something i’ve thrown together.I’ve been on the waggon until today. Seriously, I thought fuck it. It’s been five years of sobriety. I just thought, I might as well. But I’m cool with it.”

“We gout our inspiration from looking through Pinterest. The we raid each others wardrobes and piece it together.” 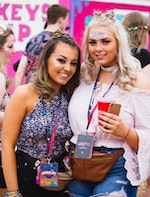 From yoga to running, to just hanging out at the weekend - Here are our favourite leggings for 2018....

We caught up with the badass Nina Burrito, to ask what threads she's rocking when she rides...

Are you a fitness junkie that's always on the move? These garms were made for you...