Artist Sophie Tea exploded into our consciousness in a blaze of kaleidoscopic colours, a whirlwind of positive vibes, glitter and stoke.

The Wolverhampton born modern artist creates bold artworks, fusing together inspirations from her travels with a fresh-new aesthetic that’s been makin’ waves.

We sat down the 25-year-old artist and modern day girl-boss to talk psychedelic lions, travelling as an epiphany, how exactly she started her amazing business and what it was like being a part of the glitter-boobs phenomenon. 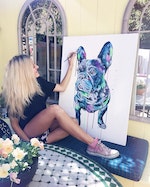 Where are you from Sophie?
I was born in Wolverhampton, went to school in Birmingham aged 10, then moved to Manchester with my dad. I went back to Birmingham for University, and studied Business.

So, you actually didn’t study art at University? How did it work out that you became an artist?
I did a work placement at a pharmaceutical company. An amazing opportunity, but I fucking hated it! I was really bad in a working environment, especially at the lower level, because it’s all about being organised and good at admin, and those are skills that I do not have, still to this day! I went back to university for my final year, but never thought anything of taking a different route. I after graduated I went travelling to India. In Jaipur, there was this hostel. I asked the manager if I could paint a wall for a free stay, and he said yes.

That’s cool, what did you paint at the hostel?
When I was painting this thing, it was one of the happiest moments of my life. it was a rainbow animal cow. That was one of those moments. I was like right; this is actually what I’ve got to do now.

The reason it all took off was because I posted that picture of the cow on Facebook, and then my mates asked me if I could do a commission. It’s always been social media driven. I’ve always got my work from mainly Facebook, until about six months ago, now it’s purely Instagram.

I had it in my head that I didn’t want to be an artist because of the skill set that I had. I wanted to set up a business in the art industry and help artists. I’d done some research and I wanted to help artists get commissions. I started making an app, and got pretty far. I had some investment, and then this particular investor wanted majority equity stake. I said no, that was the whole reason I had decided not to take the graduate scheme, because I had wanted to control my own shit.

And you were how old at this stage, 21?
Yep 21. Then I applied for this scheme that gives you access to mentors coaches you through the whole start-up process, I was convinced I was going to get it! I went into the interview in front of this panel of investors, and they ripped apart my idea. They just wanted to get behind my motives and what drove me.

I told them “I’m really passionate about art, over the past 6 months I’ve realised it’s what I need to be doing to keep me sane and I’ve been painting commissions to fund this.” One of the interviewers said “Why don’t you just be an artist then? You’ve got all these figures, you’ve got a certain amount of commissions.” It was the first time I’d been validated by someone I really respected. So I was like fuck it, maybe I should.

And has social media played a big part?
The most amazing thing about what I’m doing is that because of social media, I was one of the first in this cohort of artists to get on the bandwagon of getting commissions off of Instagram and Facebook.

I’m just kind of making it up as I go along. Just do it on social, pocket all the cash, do your own marketing, build your own website. Who else can market themselves better than you?

Everything that I get now, I fucking made that. Someone’s paid me off something I’m naturally making, and the brand that I’ve built, not because of anyone else.

Your style of art is so original, you can really tell it’s yours. How would you describe it?
Expressive. Spontaneous. It’s contemporary art. I know that as an artist, I’ll grow into developing art work that’s more meaningful in the future. But at the moment, I’m concentrating on aesthetics – what looks nice, what makes me feel good, and that’s honestly as basic as it is right now. I’ll get there with some meaningful stuff as I grow and as my audience grows with me, but at the moment, it’s just like happy go lucky, rainbow, colourful shit.

What are some of your favourite pieces?
I’d say my biggest money maker would be the psychedelic lion. I sold that a year and a half ago for £250. On print sales, on that one lion, I’ve made about £20,000. That’s what pays my rent!

Even though it is the most colourful and the most bold, what people would probably associate with me, I really enjoy doing the abstract stuff. It’s not as commercial though so I can’t completely dedicate myself to that because I’ve still got a business to grow.

I was flicking through some of my iPhone pictures the other day, I spent a lot of time in Australia, I can see all their patterns and stuff being brought out in my paintings. That’s awesome, because I didn’t even know that was happening.

So you get a lot of inspiration from being on the road?
There’s two ways that my travels inspire me. The first one is the colours and the textures, the aesthetic things. The second one is honestly, I paint my best stuff when I’m in a positive place. One hundred per cent, I produce my best work when I’m feeling good. Travel is what I need to give me inspiration and motivation to come back and slam it. I need travel to keep me going. What did it feel like being part of the glitter shine viral success?
It was amazing. Firstly, as a best friend of Jenna (owner of The Glitter Shrine) I was so proud and overwhelmed. Jenna is so creative and ballsy. We went to Rise Festival, which is a ski festival and she was like “Right! Get your tops off on the slopes, glitter boobs.” In the snow and freezing cold. I’ve always been self-conscious of my boobs and I had nothing on apart from glitter.

It was at Coachella that it went viral. It was amazing. What a blessing to be part of the start of such an amazing brand with your best mate.

Did you feel nervous, what does it feel like walking around with no top on and just glitter?
I actually have no shame anymore. It’s liberating. Actually now, its not even outrageous anymore, people think its ok to do it.

Your career is in such an exciting place. What are your wildest hopes and dreams for it?
I’d like to collaborate more, and with bigger brands. I’ve got a collaboration with The Body Shop this year. Every year they choose an artist and get them to decorate a hand cream, where a percentage of the sales are donated to a sustainable cause. What are your best tips to be entrepreneurial and start something you believe in?
Just do it. Just make a start. One of my favourite quotes is “One Day, or Day One.” Even if it’s the tiniest little email, or something towards what you want to do, just get it done, because that’s the first step.

If you derive value from security, then you’re never going to be able to start something up, because its turbulent and you never know if you’re going to be able to eat, especially at the start. I’m all right now, but you’ve got to shift your perception and thrive off that sense of insecurity and instability. Just flip it round.

I bought a book yesterday someone had told me about, with this quote by Eric Fromm. “Creativity requires the courage to let go of certainty.” It’s just about not being scared of not knowing what’s going to happen next, and just embrace it.

We caught up with the badass Nina Burrito, to ask what threads she's rocking when she rides...

Are you a fitness junkie that's always on the move? These garms were made for you...

From the beach to the streets, these new kicks are the perfect all round shoe for adventurers...